It has been a hectic couple of weeks for me as I had been racing the Tour de Formosa, a Deaf Invitational showcasing some of the world’s best cyclists, and my writing duties had been re-directed to cyclingnewsasia and you can find all the complete daily race reports there.  20 riders from seven countries participated in the six day 950km race around the island of Taiwan including Australia, New Zealand, Belgium, Russia, Czech Republic, USA, Taiwan.

Speeding along at 60km/h during Taipei-Taichung stage

The main purpose of this event was to help raise the international standards of Deaf racing and provide the opportunity to cultivate deep friendships. The organizers also used this Tour to show-case the beauty of Taiwan’s culture and landscape as well as improving the image of Taiwan on the world-stage. It is hoped that this event will grow into something equivalent to the Tour de France for Deaf cyclists throughout the world. However, in my view, this kind of status is far in the distant future as there are quite a few changes the organizers need to make to make this an event that follows the same rules as any UCI sanctioned race.

For seven days, we spent between 4 to 5 hours on the bikes per day riding up to 170kms. Due to lack of police support and safety reasons, the first half of each stage had to be at a controlled pace of 30-33km/h average in double pace-line; very much like a pro training camp with each team having their own team car for supplies and mechanical issues. As I was the only representative from New Zealand, I had a team car to myself and one of the Aussie support people kindly offered to be my feed. Usually it was the last 70kms that we were unleashed and allowed to “race”. This is where the dog-fighting ensued as riders relentlessly kept attacking till something rolled away. Being the sole Kiwi rider in wearing the Silver Fern, it was very hard to work out which attacks to follow and the raging angry Russian team of four riders did not help my cause. Throughout the tour, for reasons unbeknown to me, I suffered cramp each day and this only served to make things more difficult as I tried to survive. I also had the reputation of being the attacking Kiwi, but never worked in the break or on the front of the peloton. I would work in the break when it counted or when I was not trying to control the cramp monster. When I would stop pulling through, I came under the abuse of the Russians and the Belgium riders… the Aussies and Americans were fine. Whenever I wanted to roll at the back, a European rider would try and gap me off and then sprint back to the peloton or the breakaway when they saw that I was not going to go around them.  I focused on riding as smart as I could as the one-man band verus a very strong Russian squad that was mostly dictating the race. Dmitriy Rosanov was the strongest brute of them all and won the tour with his four stage wins. The Russians seemed very well coordinated and would keep the barrage of attacks coming. I would get in the counter-attacks, but most of the time no one was able to come with me so I would sit up each time and wait for the chasing peloton and try again. The Russians short-coming was that they liked to chase each other down for some reason, perhaps they all wanted to be in the break to demonstrate their awesome power. At one point, there was three Russians in the break with myself and Nick Schrieber (World Deaf Cycling Champ),  I was focused on surviving till the end and did enough to help ensure the break establish the gap required but when cramp started to come, I took softer pulls and missed turns on the front. Despite being three Russians in the break, they still got angry with me not working hard enough and were extremely frustrated when I refused to cave into their demands.  But this is bike racing. You have to do what you can to survive and get the best possible result.

On the final day it was a battle between myself and the young Russian for 3rd place. I knew I had to be on my A-game to beat him up the 20km Yangming Mountain climb that was at the very end of the 120km stage from Yilan to Taipei. I was surprised that the Russian did not attack on the climb and I paced him and Nick Schrieber for the duration of the climb. I threw in two attacks and one of them was right after Schrieber put in an attack. This one established a gap of 100m and forced the Russian to chase me. In the end, it seemed Ivan Makarov lacked the finishing punch that is required at the end of races. On the 18% slope in the last 500m, Makarov kicked into action but I was able to match the acceleration and then open up my final sprint about 400m from the line. This dropped the Russian for good and it was only me versus Schrieber. Schrieber clawed his way back to my wheel but then conceded to me and let me take the valuable point I needed to keep 3rd position.

Highlights of the Tour de Formosa

My next post will showcase some more photographs of the Tour de Formosa, both racing and behind-the-scenes. I would like to thank the following supporters, without which my trip to participate in this event would not have happened: 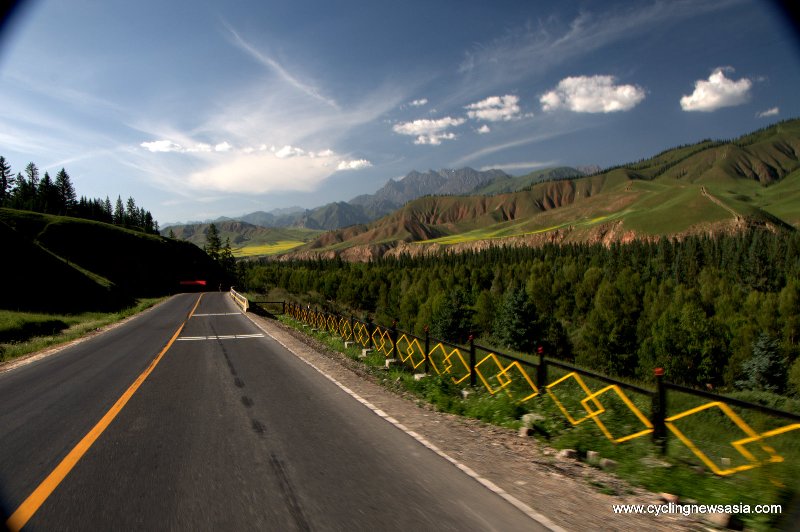