Myself cornering at the San Rafael Twilight - Photo Jeff Namba

It is always great to race criteriums in California. The Norcal Racing Calendar is just full of super fast criteriums that are packed with large fields chomping at the bit. Some of the fastest races are held in California such as the San Rafael Twilight that was staged on July 9th, 2011 by Project Sport. Project Sport is a Sports Marketing company run by Ryan Dawkins, an avid athlete who has the vision to bring the biggest and the best events to the California region.  The San Rafael Twilight race that I attended as a racer was a super charged event filled with tens of thousands of spectators cheering on the pro racers zipping around the short 1km course, averaging 29-30mph each lap. Brad Sohner, a well known race announcer, was there to hype things up and provide a running commentary as the exciting race unfolded. The presence of long-legged Umbrella Girls to usher riders to the start-line completed what the San Rafael Twilight is all about: A Nightclub on Wheels!

To read about what other people are saying about this race check out the following links:

More than 130 riders lined up and I managed to get a second row start, right behind the call up riders. Despite slipping out of my pedal right at the start, I still managed to maintain a good position going into the corner. I had done the 35 plus men two hours earlier and the legs were feeling good in the early stages of the San Rafael Twilight. I had worked my way near the front of the race, perhaps around top 15 and was feeling comfortable about maintaining my position there with thoughts about moving even further up when the opportunity presented itself. However, after five laps of racing, there was a massive crash that took out many riders. I did not even see the crash as it happened back in mid-pack. The organizers neutralized the race for six laps to allow the crashed out riders to get back into the race.

Neutral section: one of the hardest parts of the race

Instead of stopping the race completely, the organizers let the riders roll around while the crashed riders organized themselves at the pits. Even though it was neutral, it was perhaps the hardest part of the race as riders still kept a brisk pace and alot of jostling for position was going on. I found myself going from the very front to mid-pack due to this occurrence and my hard won position prior the neutralization was lost. When the race was underway again, I had to go hard to regain some position again. I was slowly but inevitably moving up, even when the pace was on during the mid-stages of the race. However, some of the front runners slammed on the brakes going into turn one that caused a ripple effect. I found myself sliding sideways and connecting with a rider in front of me but miraculously no one crashed – at least around me. However, this resulted in a track stand and a hard re-acceleration in a hard gear. I almost cramped from this sudden violent effort and despite not getting dropped, the front runners had poured on even more pace so that it was near impossible to move up. From that point on, I was well in the red-zone just following the wheel in front of me. From one corner to another, I could see the long snaking line of riders disappearing around the next corner.  Going down the back straight, I could see the front of the race bunching up as the leaders would get some recovery and wished that I could have been just another 50m further up the road! Riding mid-pack or near the back is actually more difficult than riding at the front (which is why positioning and maintaining your position in tight criteriums is crucial) and it just makes for a suffer-fest. I did have brief glimmers of hope of moving up when the pace eased slightly in last 10 laps.

With about six laps remaining, another big crash occurred down the right side on the barriers. I was far back enough that I could avoid it, but it still created the ripple effect and from this point onwards, the peloton split into two with myself in the second split. Unless the pace slowed slightly, there was going to be no chance to catch the front bunch again. I rolled in for 56th and happy that I emerged without crashing and losing skin! I have a big mountain bike race to do in two weeks time in Mongolia and have to be careful not to injure myself before then! If you are interested in following me for the Mongolia Bike Challenge you can subscribe to this blog or follow me on Twitter.

The race was won by Ricky Escuela (Full Circle) who sprinted clear of the charging field to win comfortably ahead of crowd favourite Rahsaan Bahati (SKLZ/Pista Palace). Unfortunately for Bahati, this was the third year in a row that he had to settle for second.  Eric Marcotte (SKLZ/Pista Palace) came in third ahead of Eric Barlevav (Full Circle) and promising young rider, Logan Loader (Ride Clean P/b Patentit.co). The most active racer has to be Kelly Benefits rider, Jesse Anthony who seemed to attack non-stop. With three laps remaining he threw in his last massive attack and was still on front on the bell lap. But he was swiftly swept up by the galloping peloton intent on a frenetic sprint finale.  Other notable pro riders that tried to escape on numerous occasions included Freddie Rodriguez (Exergy), Roman Kilun (Kenda/5-Hour-Energy) Andy Jacques-Maynes (Bissell Pro Cycling) and Kirk Carlsen (Garmin Chipotle Development).

The course on paper looks easy enough with its simple four-corners but in reality it was a very hard course to race on. You have a long false flat straight through the start/finish area and then you have to contend with a short power hill to get to the top point of the course. From there its down-hill all the way to the final corner. The best place to move up was on that power hill and the first 50 meters coming out of the climb. But from that point onwards, especially if the pace is on, it was very hard to move up. You could move up if you were prepared to take some risks and taking the inside lines but even then you needed to do a full on sprint to make it a clean cut move and your legs could only handle this for a short while. Due to the nature of this criterium course, many riders were pulled from the race with 86 finishing from 135 starters.

Check out the photos below!

Jesse Anthony during one of his many attacks - Photo Wil Matthews

Rahsaan Bahati rolls and drinks Monstor for his pre-crit juice!

The Pro Men lining up...

Check out the crowds lining the course...

Bahati is escorted by a friend

Thanks to Wil Matthews for contributing great images of the San Rafael Twilight. Stay tuned to this site for more photos from the racing and also more of the Umbrella Girls.

For full race results check them out on: Velonews 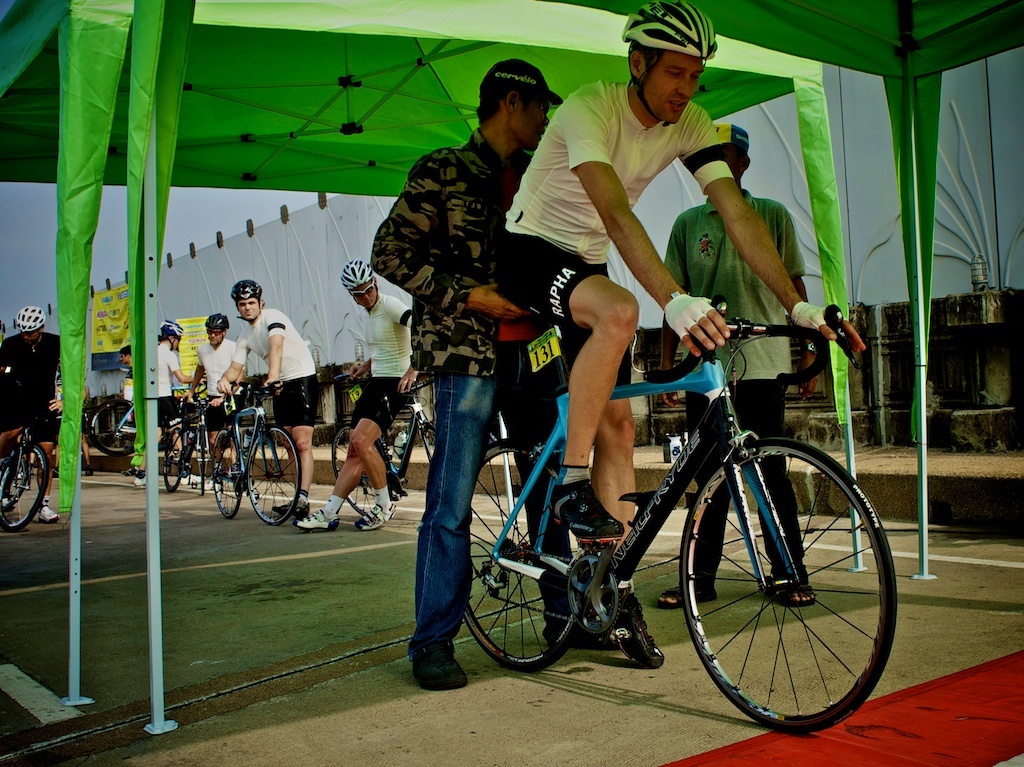