Home
>
Cycle Travel
>
Xiaogetou – Xindian loop 60km
Please Share
The sun came out today for the first time in a few days and was considerably warmer (26 degrees), so I took the opportunity late in the afternoon to go back up the Xiaogetou climb that I had done during the misty rainy weather this past Sunday with the 7th Park Bikeshop. Since I was on my own and had taken the previous two days completely off the bike, I was anxious to do some solid training and to see what the scenery was like with the sun out.
By the time I had gotten to the start of the actual climb on route 47, the sun had mostly disappeared in the low lying clouds and it seemed like some threatening clouds were on the way. The weather held out though. The photo above is the view that was covered in mist on Sunday from Helen’s Mobile Cafe Shop.
I had planned to do a 20 minute interval as part of my workout and using the climb. Once through the tunnel and the first township, I launched into the interval and the first few minutes I felt like I was putting out too much wattage, and thought there was something wrong with my power-meter, so I zero’d it out a couple of times to make sure I was getting the correct reading. As it turned out, I was going too fast in the beginning and faded during the second half of the climb! I averaged 320 watts for the 20 minutes with an average heart rate of 170. Interested in seeing detailed data from Training Peaks, click power file. Once at the top, I took a breather at Helen’s Coffee shop (it was closed) and took in the nice views before heading down Route 9 to Xindian. I was going to go back the same way I came, but I discovered that Route 9 ended up back into Taipei City via Xindian and decided to explore the new way. Once I got back to Xindian, after carving up the fast winding open descent, it was a nice spin back home along the river cycle paths in the sunset. It was better than weaving in and out of rush hour traffic on Heping Road!
Since I had only snacked all day, I was ravenously hungry (burned over1400 calories during the ride!). Jen and I went out for dinner at a place in the Shida Night Market that cooks your food in water. You can choose what you want on the plate by using tongs to pick up the numerous choices on offer to put into your little basket for the cooks to prepare for you. I got noodles, mushrooms, tofu, tianbula, cabbage, spinach, broccoli plus a few more that I don’t know the English words for. It was a healthy meal since it was not cooked in oil and full of tasty vegetables.
A great traditional Taiwanese meal to have after an awesome training ride. We capped it off with ice-cold Pearl Tea (Zhenzhu Nai Cha). The total price for two people including the Pearl Tea was $200NT ($6.25). Price depends on what you choose. There are meat options if you feel like eating meat.
If you are interested in checking out the location of the ride, you can check here: Google Map. Rank on his blogspot has written up an excellent set of directions of how to get to the training route. 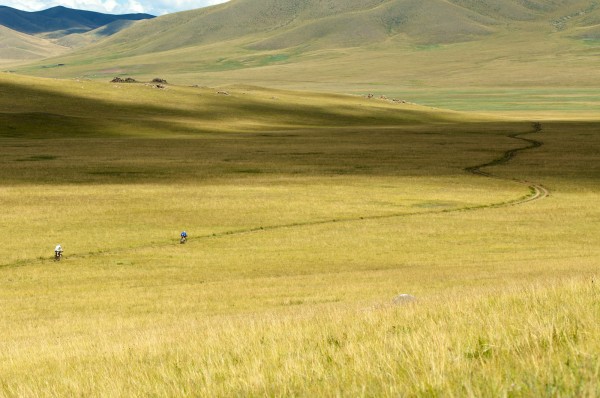