To get there: It is quite complicated to get to the destination where the Genghis Khan Mountain Bike Adventure was held. It proved to be a long and arduous journey both ways for me and hope for future events, the accessibility to this beautiful region of China can be improved.

To get there once must first get to Xinlinhaote by small aircraft either from Hohot or Beijing. From Beijing there is only one flight per day (7am) but Hohot has several flights that are spread out. The fare is 600 and 700 respectively. To do the Beijing flight, you need to be already in Beijing overnight to make the morning connection! In my case, my journey was long and arduous because I took the train to Shanghai; subway to Hong Qiao Airport; flew with Spring Airlines (Chun Qiu) via Hohot to Xilinhaote. What is the kicker, is that you have to travel for almost 3 hours on this rough bumpy gravel road to reach Xiwuqi, some 175km north-east of Xinlinhaote and right in the middle of no-where. Only endless rolling grasslands, Yurts and the occasional cluster of brick buildings.

It took me 18 hours to reach Xiwuqi and it was 1.30am when I finally arrived at the Xiwuqi Hotel where I was staying. The taxi driver had sped over the rough gravel road like a demon, and this resulted in me getting this massive head-ache and a mouthful of dust. An ideal way to prepare for the 3-day mountain bike adventure that I was participating in! I was also getting sick – something that is not normal for me. I think it must have been the stress of the travel (missing the first flight due to the travel agent not giving me all the information) and the fact I did not have proper food at all for the entire trip duration – only a couple of my trusty USANA nutrition bars, banana and water! There were flight delays, and I could have gone to grab a meal however I was afraid that the boarding would commence during my absence.

Fortunately the race start was not till 2pm and this gave me a chance to try and sleep/recover. I had signed up to use one of the Nordic Ways rental mountain bikes and since I was one of the last one’s out in the hotel lobby, I was left with the last 19 inch bike that was in poor shape! The rear tyre was completely flat and the front derailuer was completely loose (could move it up and down the tube with my hands) and there were frayed wires. This bike was in no shape to take on a mountain bike race! Fortunately, I was able to secure another Nordic Ways bike (a 21 inch), installed my SPD pedals, adjusted the bike to my measurements and was ready to race the 14 kg mountain bike that was of solid build but not of race quality!

Stage 1  – consisted of a 48km loop in the grasslands surrounding Xuwuqi. After some traditional performances on the stage, riders from the long/short course were combined for a mass start. For some reason, most of the Chinese who were registered for the 48km switched to the short course at the last minute so there was only 60 competitors in the long course instead of the projected 100 plus riders.  We had a neutral start loop of about 1km before launching into the climb that loomed in front of us. We were already eating the dust that wind was kicking up. It was only going to get worse when the riders started.

The lead-group flying through the Grasslands

When the gun went off, the riders attacked the hill hard in their bid to be near the front when the race crested the top and into the sweeping valley.  A select group of 12 riders formed going over the summit, including all the big hitters that were going to feature well in the upcoming three days of mountain bike racing. I rode the climb well, but was held up by three guys in front of me that got gapped off by the lead group. I crested the climb about 15 seconds behind this group but was able to re-connect with them on the downhill. My time with the lead-group was limited though as when Feng Kuanjie from Holy Brother attacked to ride out the front solo this increased the pace of the group. I was still recovering from my previous effort and did not have the legs to match the acceleration, thus dropping off the pace at the 15minute mark. From this point on, my race just fell apart. I was struggling to survive and was caught and passed by alot of people. The pumping headache I had at the beginning of the race was still present and my body did not seem up for the task – “hitting the wall” at the halfway stage. I persevered and finished the stage in 18th position, but almost 20 minutes down on the winner!

The Holy Brother Dynamic Duo powering away to a substantial lead

There was freshly cut watermelon and bananas awaiting finishers and I gorged myself on the juicy watermelon, hoping that the anti-oxidants will help speed my recovery and also help get rid of whatever virus I had. I was feeling so bad, that I was doubtful of starting the next day as I did not want to worsen my condition. I would play it by ear and try and get as much rest, water and good food in.

The Traditional Mongolian Ceremony with the whole roasted Goat

The juicy goat meat and the intestines!

Good food – there was no shortage of this as riders were treated to a big traditional Mongolian style banquet including a whole roasted goat that went through an elaborate ceremony. Dishes came out one after the other as riders feasted on the variety of foods. Once we had eaten more than our normal share of food, there was still plenty left on the plates!

After this banquet, a big bon-fire was lit and blazed all night, keeping the surrounding riders warm in the chilly Inner Mongolian air.  The wild dancing around the bonfire continued till 11pm before most people retired to the Mongolian Yurts to sleep for the night.

Yurts riders stayed in after Stage 1

Stage two was also a 48km one and also started at 2pm. This gave us more time to relax and recover. Since most of my things were at the Xiwuqi Hotel, I opted to return to the hotel to sleep for the night instead of the Yurts. Stage two’s account will be in my next article.

This guy Keith who was often in the lead pack, filmed alot of the racing and scenery

There is video-cam footage of the Inner Mongolian Mountain Bike Adventure that was taken by Keith from the USA. When the footage is available, I will have it uploaded to my website.  Also thanks to QQride for the awesome images!

If you are interested in taking part in events organized by Nordic Ways – please click here for further information. They have iconic events held all over China and the next event is going to be the Vasa Bike Festival in Changchun (North-East China) including road and mountain bike racing. 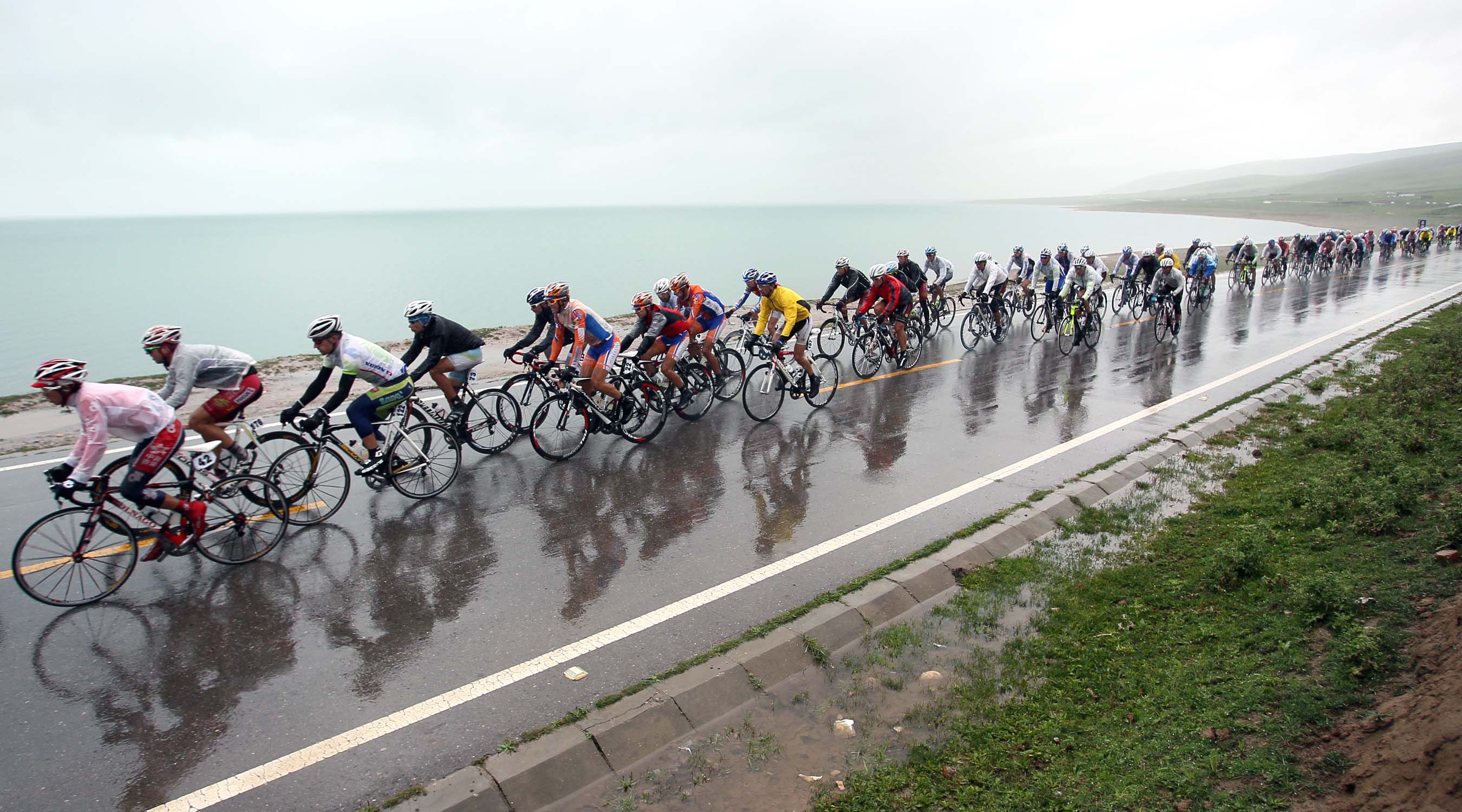